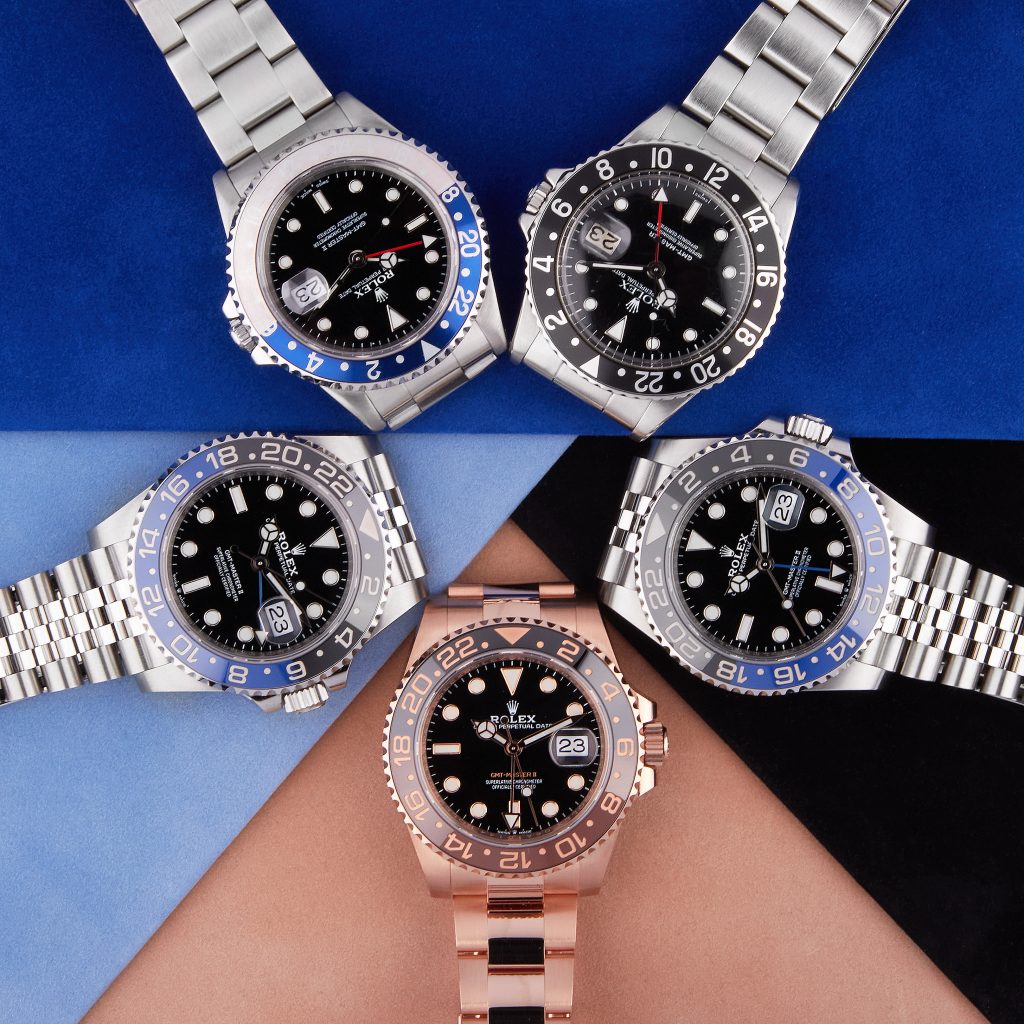 Necessity is the Mother of Invention
Released in 1954, the GMT-Master was the result of Pan Am and Rolex collaborating on a watch that could to tell the time in two different places at once. With the popularisation of commercial flying, the distances of flights became greater. This resulted in pilots crossing time zones during flights more frequently, and thus a need for uniformity across the industry. To eliminate timing errors and the like, the aviation industry began to use a standard time-zone. Greenwich Mean Time was decided upon as this standard and as such, the GMT-Master’s fourth hand, the 2nd hour hand, was to stay on Greenwich Mean Time – which is where the name for the watch comes from. While the aviation industry switched to Coordinated Universal Time (UTC) in 1972, and pilots now set their watches to UTC, the name of the legendary GMT-Master was far too long in use for Rolex to change it.

How the GMT Evolved
The GMT-Master’s evolution is clearly defined in two separate stages. These are designated by the naming conventions that Rolex used. The first GMT is simply known as the GMT-Master, while its successor is known as the GMT-Master II. Produced between 1954 and 1988, the GMT-Master experienced a tumultuous start within the world of horology. The first GMT reference, the ref. 6542, for example, was just a regular Turn-O-Graph with a modified movement, additional hour hand and its famous bi-coloured Pepsi bezel. This bezel, made from an early form of plastic, Bakelite, would famously crack and break due to its fragility. To solve this, Rolex swapped these Bakelite bezels in 1956 for anodized aluminium bezels, which they kept until 2007.

Following the ref. 6542, Rolex released the ref. 1675 to replace it in 1959. This latest version of the GMT-Master came, rather fittingly, with new technology. Crown guards, a new calibre 1565 movement and print on the dial to signify that the movement was “Superlative Chronometer Officially Certified” all highlighted Rolex’ move towards modern tech. This calibre 1565 was then upgraded to the cal. 1575 in 1964, where it remained in use until 1980, which is when the entire reference was discontinued, and the ref. 16750 was introduced. This reference came with the new cal. 3075 movement that introduced a quickset feature. The ref. 16750 also came with 100m water resistance, double the previous models and what remains standard within the collection today. With it being the last of the GMT-Master references, the ref. 16750 is a highly sought-after timepiece thanks to its iconic heritage and superstar descendants.

The Master II is Born.
Before the ref. 16750 was discontinued in 1988, Rolex released the new GMT-Master II, ref. 16760 in 1983. Nicknamed the ‘Fat Lady’ due to its ‘fatter’ case, thicker crown guards and slightly wider bezel than the previous GMT-Master I models. It was also the first watch within the GMT collection to have indices made of white gold. This was to prevent tarnishing, a problem that had begun to plague older models. The Fat Lady only lasted until 1988, when it was discontinued. In its place, a slimmed-down model was born, the ref. 16700. Available with the famous red and blue Pepsi bezel, or an all-black bezel, the ref. 16700 became Rolex’ budget-friendly option when the ref. 16710 was released alongside it the following year in 1989.

Released in 2007, the ref. 116710 was the biggest leap forward Rolex had made within the GMT-Master II collection. Equipped with a beefier, yet still 40mm case, wider lugs, bigger crown guards and what is known as a “maxi” dial for its thicker hands and broader indices, the ref. 116710 looked much more significant than its predecessors. The biggest difference from the older GMT-Master II models was the new cerachrom bezel it had. Made of patented ceramic material, the first ceramic bezels Rolex made were solid black as they could only make them in one colour. Rolex later released the first bi-coloured bezel GMT-Master II in 2013. It had a black and blue bezel and was nicknamed the Rolex Batman. Five years later in 2018, Rolex debuted the modern Pepsi bezel on its first steel offering since 2007.

While the GMT-Master is no doubt one of the most iconic watches that Rolex has made, the demand for them on the secondary market has begun to balloon far beyond anything the industry ever experienced. For example, one of Rolex’ most desirable precious metal pieces is the 18kt everose gold Master II ‘Rootbeer’. In addition to this, the problem of lengthy waiting lists plagues AD’s as the demand for these beautiful timepieces far outstrips production. This demand is no surprise though when you look at just how beautiful and iconic this timepiece is.