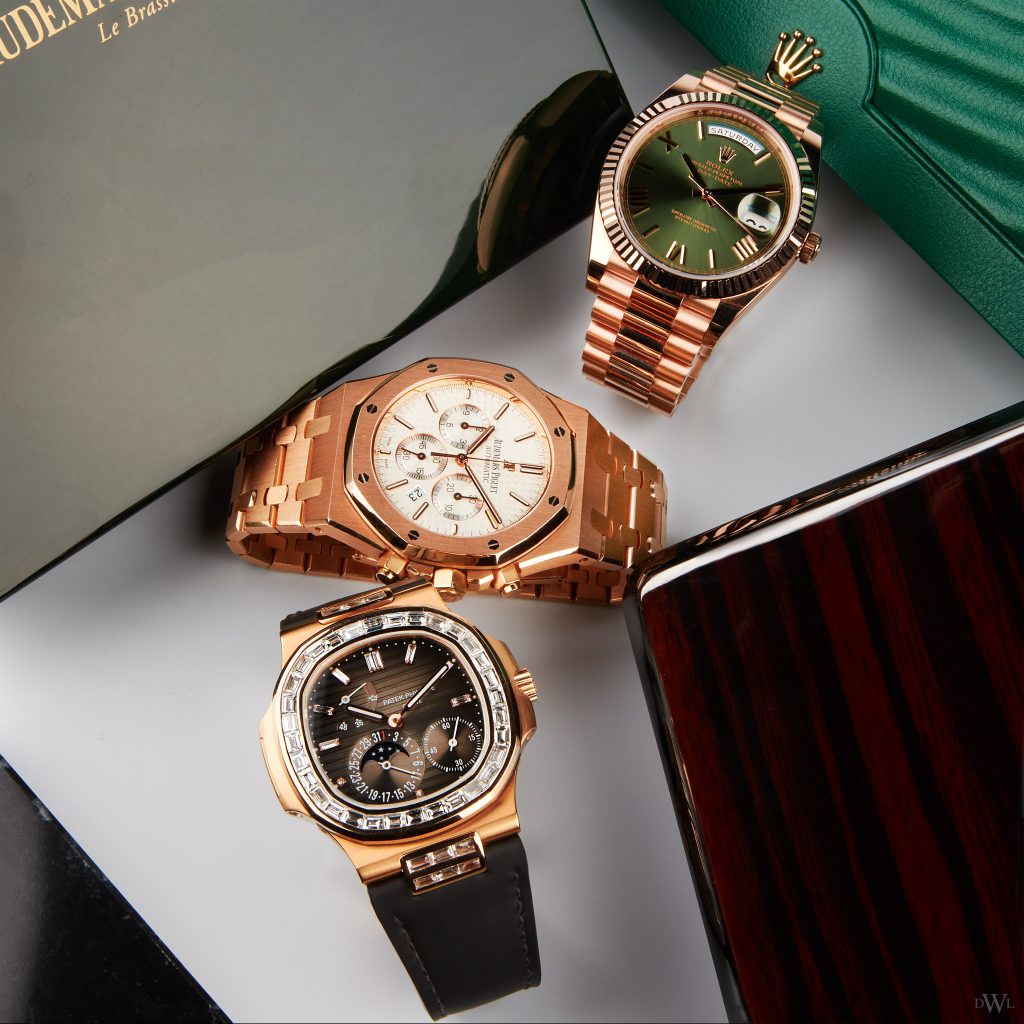 In today’s market, it is no secret that one metal reigns supreme over every other metal, stainless steel. With its lower price tag and robust nature, it is an excellent metal for the casual watch-wearer, but its greatest strength is also its weakness; it is not exclusive. While watch lovers worldwide love steel, those with deeper pockets often want something that can set them apart from the norm, and the answer to their prayers is usually precious metals. Traditionally speaking, luxury timepieces were typically made from those more luxurious metals. Today, we will explore rose gold and delve into three of the heaviest hitting rose gold timepieces on the market today.

Released in 1956, the Rolex Day-Date has existed as one of the most widely recognised status symbols in horology and modern society. Worn by famous presidents, athletes, businessmen, musicians and so on, the Day-Date communicates prestige, luxury and success. Featuring an iconic aesthetic that has remained remarkably unchanged since its debut, the Day-Date features the day of the week at 12 o’clock and the date at 3 o’clock on its dial and one of watchmaking’s most recognisable bracelets, the President. An iconic timepiece since its release, it has only been made of precious metals and has not undergone the design revamps that sports models would in their bid to become more technologically advanced.

With that, the Day-Date’s unwavering design and rich heritage have contributed to its status as the ultimate “I made it” watch. As its design does not ever really change, the addition of new dial variants is often the most Rolex will do with this watch. For its 60th anniversary, Rolex did precisely that and released some olive green dial Day-Date models, much like the rose gold Day-Date ref. 228235 that we have here.

Released in 2016, this incredible timepiece features a modern-sized 40mm rose gold case, the Day-Date’s signature fluted bezel in rose gold and the Day-Date’s eponymous President bracelet. Fin keeping with a Rolex tradition, the Day-Date ref. 228235 is fitted with an olive green dial to commemorate that it is an anniversary model. Technologically advanced on the inside, the Day-Date ref. 228235 features the automatic Rolex cal. 3255 movement with 70 hours of power reserve and an impressive shock absorption system. Embodying everything that Rolex is about, this rose gold Day-Date distils everything that makes Rolex so special and presents it in a package that is iconic beyond belief. With its rose gold construction going that extra mile to communicate its prestige, this is one timepiece that is undoubtedly a heavy-hitter.

Released in 1972, the Audemars Piguet Royal Oak is the watch that started the craze for luxury stainless steel sports models that is still sweeping horology. With its immediately recognisable avant-garde design, the Royal Oak was quite a slow seller, given how different it was for the tastes at the time. During the 70s, people preferred smaller timepieces that were much more conservatively styled, and the Royal Oak listened to none of that. With its unusual integrated bracelet, octagonal bezel, exposed screws, large diameter and steel construction, it was a bizarre release at the time.

Eventually, it began to pick up traction and generate sales, and so AP kept the Royal Oak in their catalogue and began to create new variants, such as precious metal examples, much like the timepiece we have here, the Royal Oak ref. 26320OR. Constructed of rose gold, this timepiece is one of the heaviest hitting timepieces on the market. With the fame of its stainless steel sibling, the rose gold ref. 26320OR is one of the most desirable and exclusive Audemars Piguet timepieces available, and this model even features a chronograph complication to make it that bit more special.

With its beefy 41mm case diameter, octagonal bezel and octagonal screw-like chronograph pushers, this Royal Oak catches all kinds of light. A special version of an already exceptional timepiece, this is a watch for someone that wants an iconic watch that packs an incredibly heavy punch and is desired by pretty much anyone that casts their eyes over it.

A descendant from 2005’s ref. 3712, the modern ref. 5712 is one of the most unusual-looking Patek timepieces you can imagine. With its unique asymmetrical dial, it continues with the Nautilus’ tradition of breaking Patek’s conservative styling habits. Featuring a power reserve indicator at 10 o’clock, a date and moon phase subdial at 7 o’clock and a running seconds subdial at 4 o’clock, the ref. 5712 is a timepiece for the collector that wants a timepiece outside of the norm, and that is certainly what we have here, the Patek Philippe Nautilus ref. 5712R featuring a custom baguette diamond-set bezel, lugs and buckle.

An incredibly unique timepiece by its very design, this timepiece exceeds the remit for a conventional heavy hitter like the two previous models. With its unique left-field dial design, rose gold construction, brown leather strap and diamond-adorned bezel, it is a timepiece for the confident collector who wants something that speaks to their stylistic freedom as an individual. Unusual, hard to find and iconic, this Nautilus has to go down as one of the heaviest hitters we have in stock.