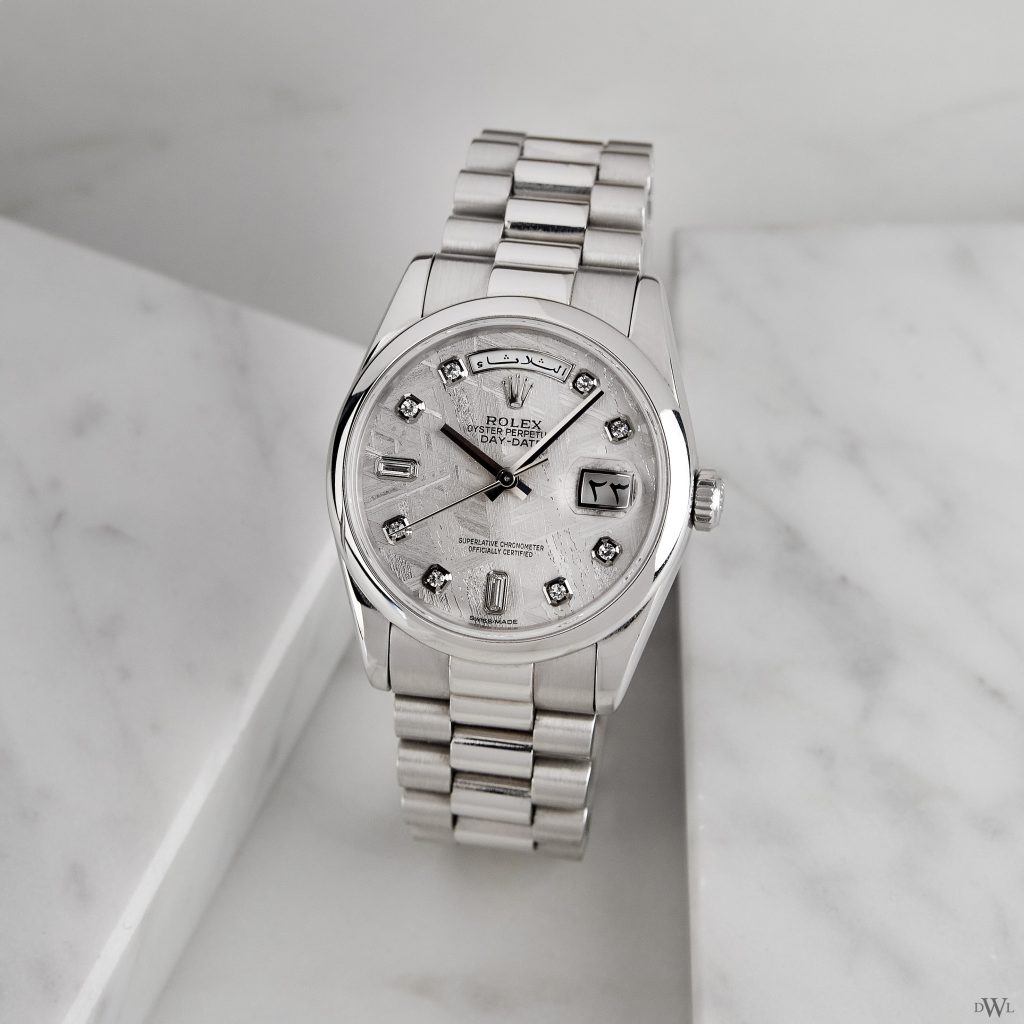 Named by Pucci Papaleo after the Arabian storyteller and Queen, only a very select few Rolex Day-Date variants bear the Scheherezade nickname. These timepieces have always been exceptionally rare as they have only ever been available on special request in the Gulf states.

Rolex began to offer the Day-Date with Eastern Arabic script in the late 1950s alongside their use of platinum to conform to Islamic requirements that prohibit men from wearing gold. Platinum Arabic script Day-Dates therefore have a special standing within the Gulf states.

The Scheherezade Day-Date was originally a Day-Date ref. 1804 from 1960 that featured Arabic script for both the day and date wheels and a platinum construction alongside the presence of diamonds on either the dial or the bezel. In addition, this timepiece is in the Day-Date’s traditional 36mm sizing and boasts another detail that sets it apart from most other Scheherezade examples: a meteorite dial.

Constructed from a slice of Namibian Gibeon meteorite, this is one of the most famed dials in all of watchmaking. Valued at around 15 times more than gold and incredibly brittle, making dials from meteorite is an extremely costly exercise due to the excessively high failure rate as the meteorite often breaks or cracks during production. To help avoid this issue, meteorite dials are often fixed to a baseplate in order to provide stability. As meteorite is magnetic, it also needs to be rhodium-plated to be fit for use in a watch.

With its exclusivity, otherworldly origins and costly production, meteorite dials are some of the most sought-after in watchmaking and paired with a Scheherezade Day-Date, it makes this watch a true collector’s piece fit for Scheherezade herself. Scheherezade triumphed over adversity and became a queen, a story somewhat linked to the Middle East’s growth as an important geo-political region – something that seemed an insurmountable challenge in the early 20th century before the discovery of oil.

Scheherezade features within a collection of Middle Eastern tales known as the One Thousand and One Nights, whose storytelling saved her life. Upon discovering that his first wife had been unfaithful, the monarch Shahryar decided to marry a new virgin every day and behead her the following morning before she had the chance to dishonour him. Upon realising that Shahryar had beheaded all the virgins in the land, a vizier offered his own daughter, Scheherezade, to the king as his next bride.

On the night before she was to be beheaded, Scheherezade asked the king if she could bid farewell to her younger sister Dunyazad. Scheherezade told her sister a long story, which the king overheard. After telling the story all through the night, Scheherezade paused in the middle and readied herself for bed. When the king asked her to finish, she declined as there was not enough time left as dawn was beginning to break. The king duly spared her life for one day to finish the story.

This began a cycle of 1001 nights and 1000 stories whereby Scheherezade would tell her sister a story, and the king would spare her life the following day to hear the conclusion of the previous night’s story. Eventually, Scheherezade ran out of stories and awaited her beheading the following morning, but the king had fallen in love with her and so spared her life and made her his queen.

An intriguing tale whereby the heroine uses her wits and talents to overcome a seemingly insurmountable challenge, Scheherezade’s strength is an important source of inspiration for Middle Eastern children.